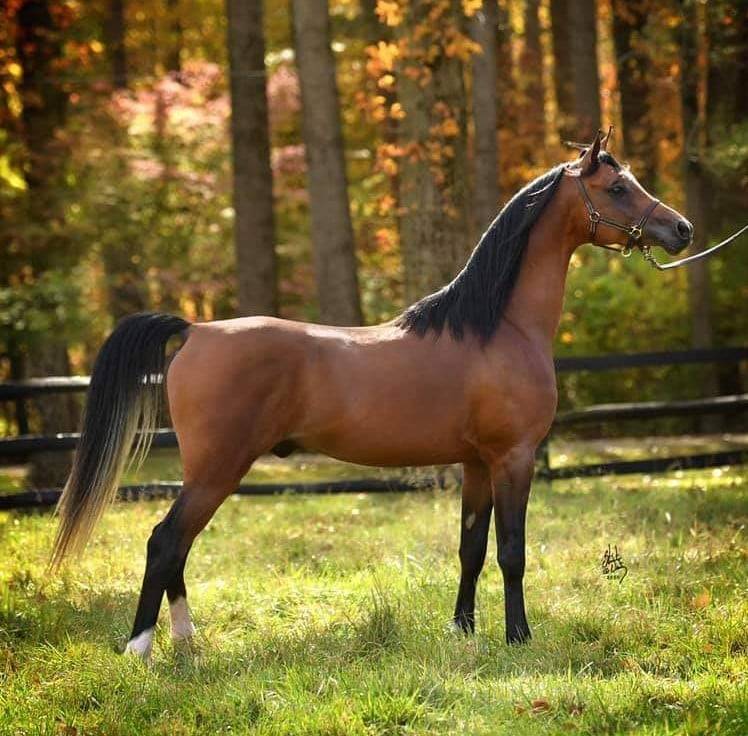 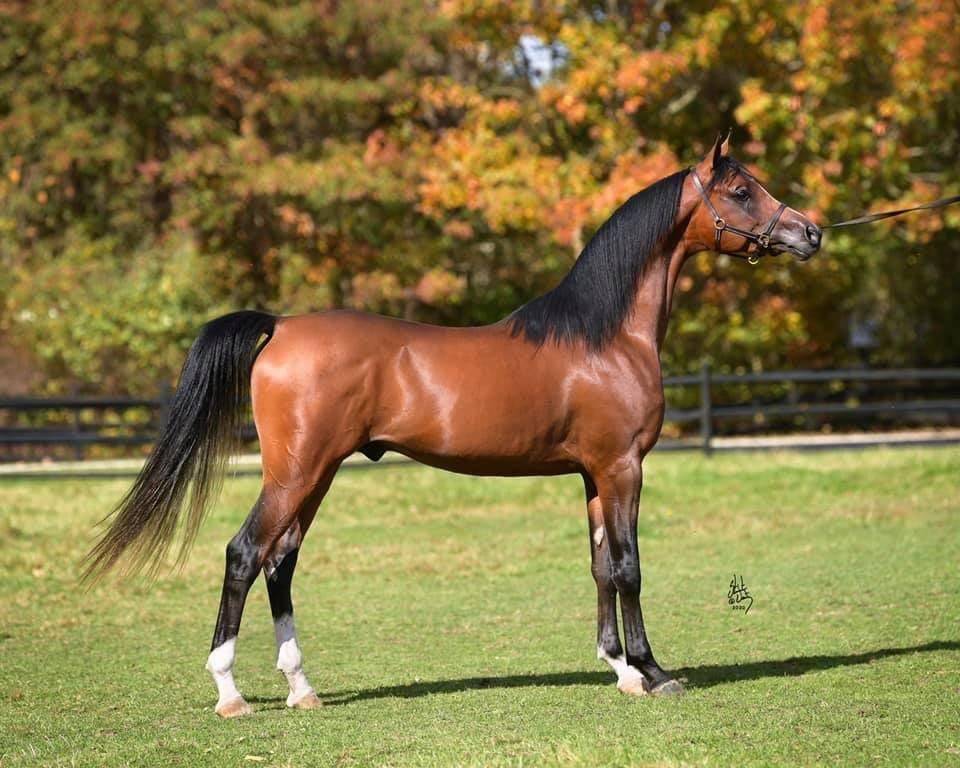 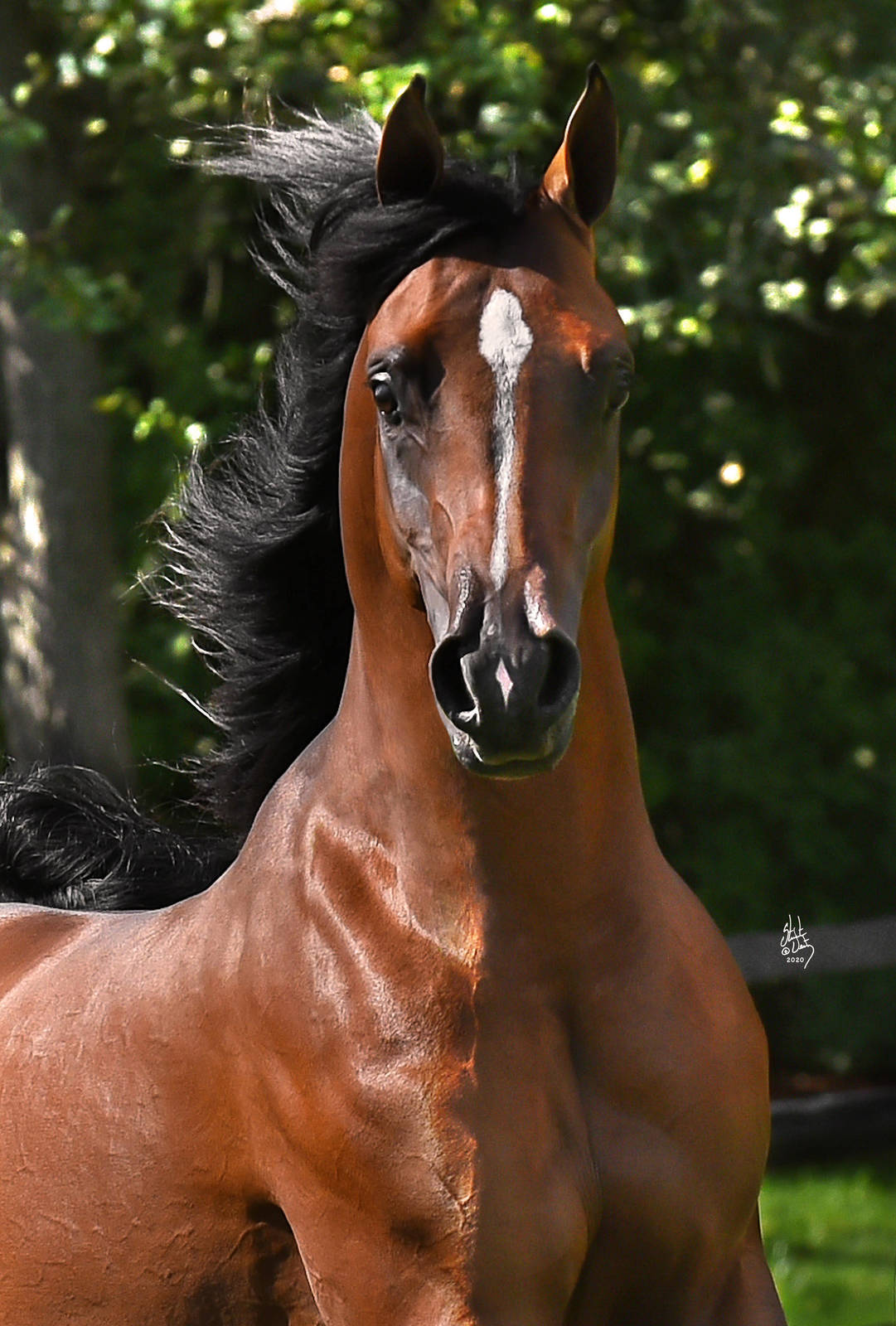 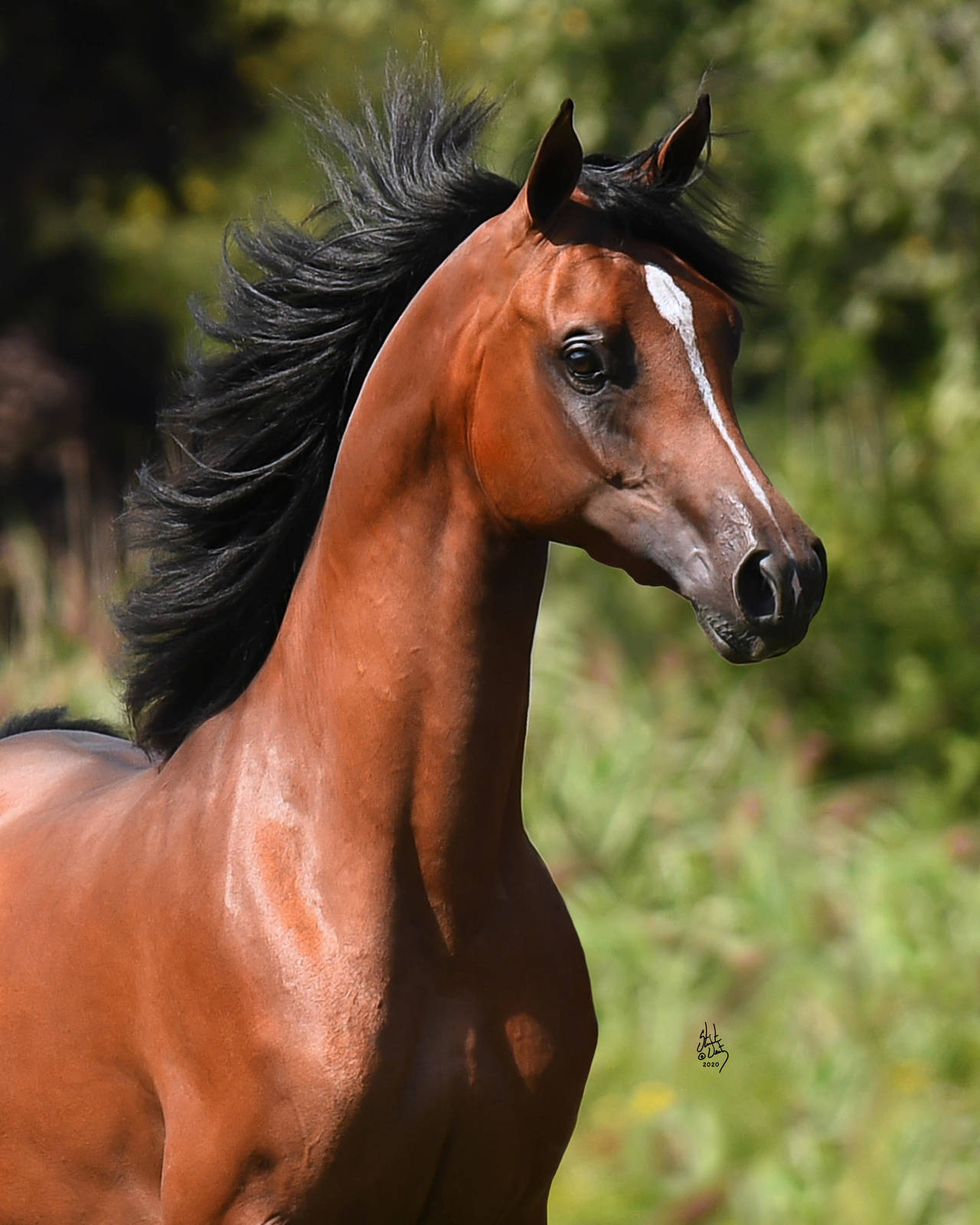 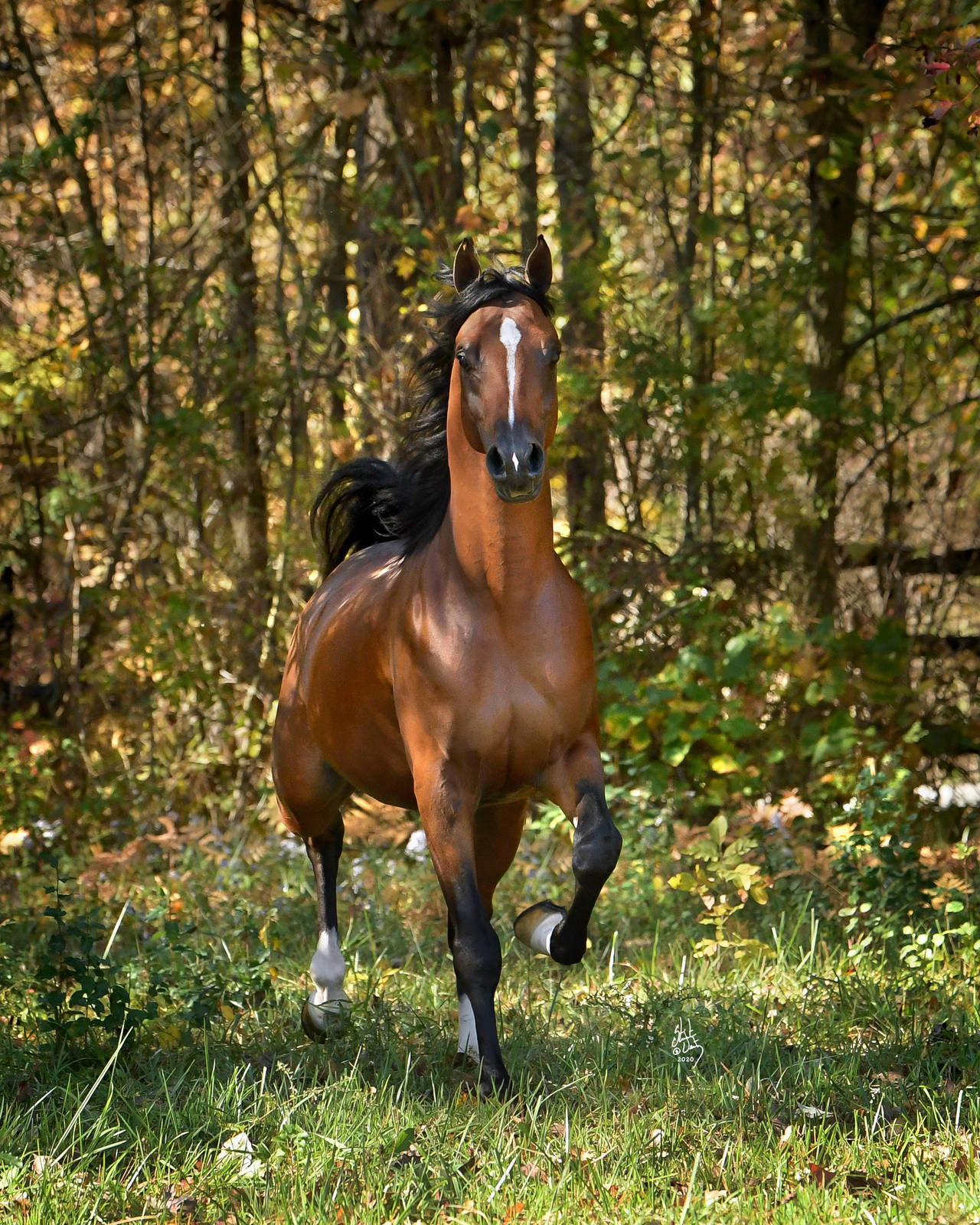 Rhythmic AHSA, a 2017 bay stallion of predominantly Crabbet Arabian bloodlines, was imported from Australia by Maroon Fire Arabians and Shea Stables in early Spring 2020 as a prospective outcross for Afire Bey V and IXL Noble Express+ daughters. The striking youngster was purchased from Grand Ridge Stud and Nichole Emanuel, breeders, though his bloodlines hail from the breeding program of Seven Oaks Arabian Stud, Carlsruhe, Victoria, Australia, a well-respected 50-year-old Arabian farm located about an hour north of Melbourne, on Australia’s southeastern seaboard.

Rhythmic’s sire is a son of the famous Chip Chase Desert Wind, an elegant, noted Arabian stallion of the 1970’s. His dam’s bloodline carries a strong cross to the famous Ralvon Pilgrim, an international champion that travelled to England from Australia and won extensively there. Lines in earlier generations of Rhythmic’s pedigree feature legendary Crabbet bloodlines like *Count Dorsaz, imported to America by Al-Marah Arabians and an important sire of successful English-type Arabian saddle horses and broodmares in this country. Also noteworthy in the stallion’s pedigree is linebreeding to Raktha, the sire of John Roger’s *Serafix, a superb golden cross with *Bask++ for high performance Arabians, and to Oran, sire of multi-National Champion *Oran Van Crabbet, winner of the U.S. National Champion Park Horse (1966), Formal Driving (1969) and Formal Combination (1969). Dargee, brought into the Crabbet Stud in the 1940’s and bringing with him additional desert breeding and exceptional offspring, is also important in Rhythmic’s ancestry.

“Rhythmic has remarkable Arabian characteristics that inspired us to import him,” says Tim Shea. 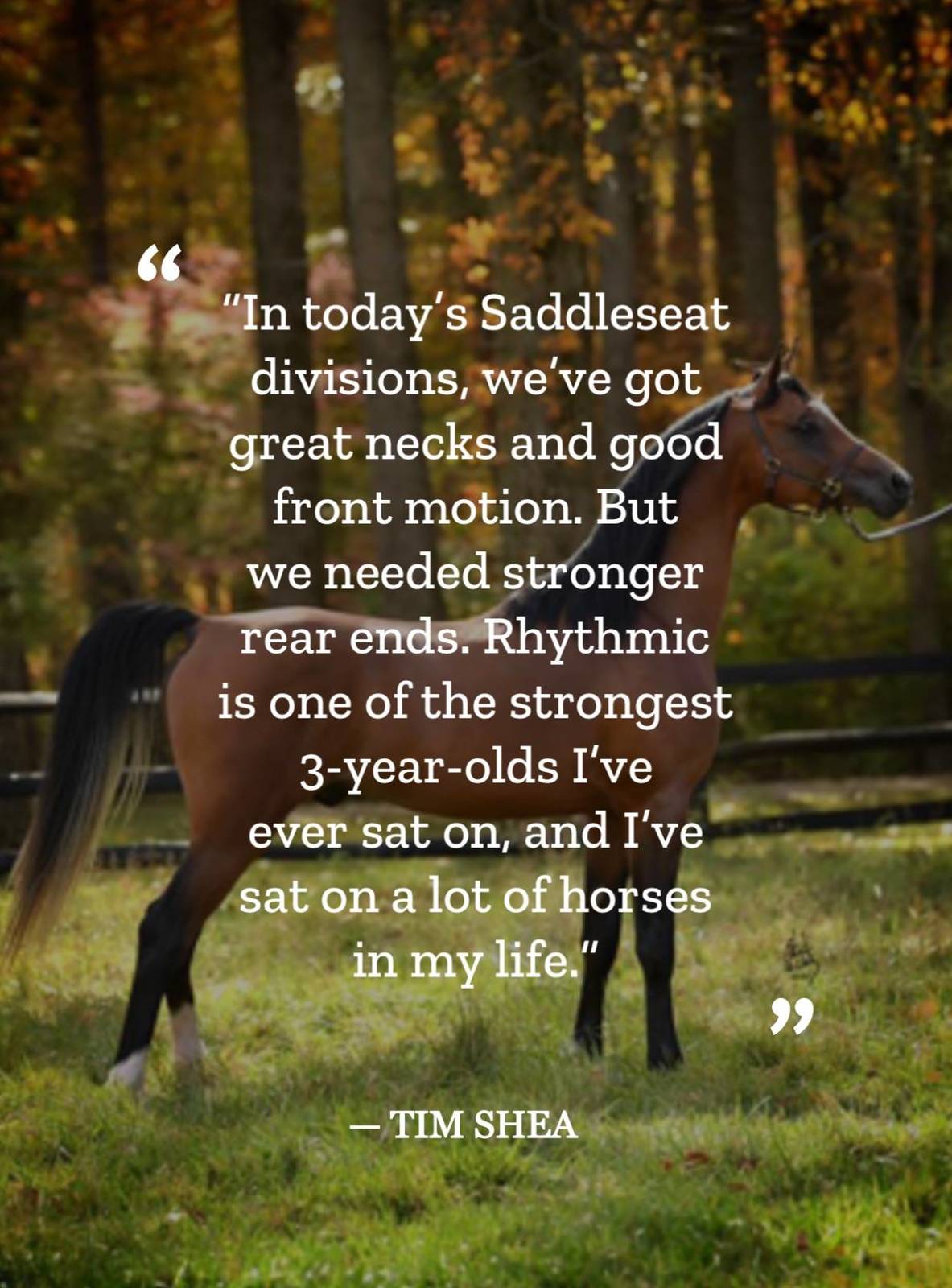 “We feel that, like most Crabbet horses, Rhythmic will sire offspring that are not reactive or explosive and can be handled by novice horsemen,” notes Tim. “Though he has just begun to breed he is totally quiet, never screaming, kicking or pacing as some stallions do.

Progressing well under saddle, he has perhaps the strongest rear end of any 3-year-old we have ever ridden!”